I was thinking for new ideas for my blog. And I realized I know some incredible leaders of amazing organizations. So, I decided over the month of April to highlight some of my favorite organizations. Some organizations you’ll will hear directly from their founder/leader and others more indirectly.

This week’s organization is: 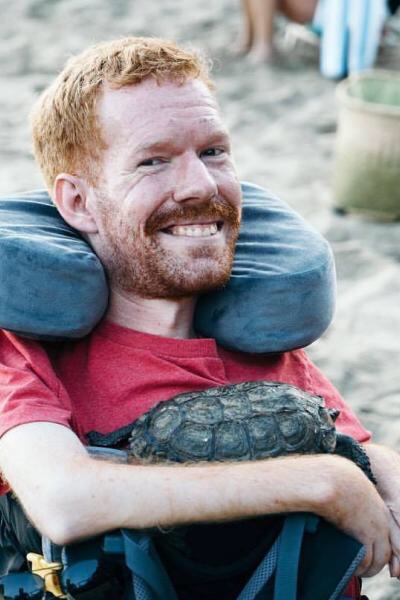 The first thing you should know about Kevan was that he was born in Fort Lauderdale, Florida. Shout out to my fellow FTL-er!

Before Kevan was a toddler he was diagnosed with Spinal Muscular Atrophy— leaving him wheelchair bound.

In 2015, Kevan decided to test the limits. Instead of writing about it I’ve linked a video to show you — Watch this!

So now that you know a little more about Kevan, I’d like for you to hear directly from Kevan. He is a man of integrity. He is genuine, incredibly gracious, and kind. I know you will be blessed by him sharing his acquaintance with fear:

“Christi, I have struggled with writing this—even starting it—for the past few weeks. Divulging fears is no small matter, you know. I had a revelation this morning, though. I was laying in bed, thinking of what fear to share. It needs to be something I’ve worked through, or at least *am* working through. It needs to be (I thought to myself) vulnerable, but not too vulnerable. And most of all, it needs to be a good story, with depth, a fall and rise, so on. Then, suddenly, the Lord said, “What are you afraid of?” A question I’d asked myself a dozen times in light of this task, but it sounds different coming from God. It pierces more. When he asked, it wasn’t, “What in your repertoire of experiences can you present as an example of fear?” It was, instead, a pointed question, “What are you so afraid of? What’s keeping you from writing this?”

My friend, I’m afraid, and I’m afraid of others knowing just that. I’m vulnerable up to a certain chalk line and then that’s it. People can see enough of my weaknesses as is—they’re plain as day. Why do they need to know my sinful, broken heart as well? I’d rather tell stories of my friends and me having crazy adventures, staring the impossible in the face, bla-bla-bla. It’s a lot easier than sharing about sitting in my dining room with no idea who’ll put me to bed that night; or the screaming matches I’ve had with Abba Father on long walks alone about everything from romance to disabilities; or the countless calls I’ve gotten over the years about friends passing away, and the whole gamut of reactions I’ve had to the news. Talk of my crew’s plans to hike this or that in two years is a lot more fun than the constant whisper in the back of my head that says I’ll be all alone in five.

I feel trimmers of fear in my gut every day. Fear of being abandoned, forgotten, let down. At least twelve times a day, I’m lifted out of my wheelchair and carried somewhere by friends, and every single time, no matter who it is, I have a fear of being dropped. So, there is the literal *and* metaphorical “drop” I struggle with. And what do I do with that? How do I deal with that fear every time I’m picked up? I let them pick me up and up and up again. And they don’t drop me. Even if they did, I’d have them pick me up again.

I settle into the fear, like sitting in a dark room and realizing everything’s still okay. Fear is just fear. It’s not a bear attacking you. It’s not a house burning down on your head. It’s not the end of the world. It’s just fear, with no substance or sway. So, I have my friends pick me up, again and again, because it’s needed for living. And I confess to my friends, I allow them to see my heart, because that’s also needed to live fully and freely. And they remain. When we decided to travel with me in a backpack (which was in itself the handling of fear), I had to open myself up to the public in interviews, films, and a published memoir—nothing to hide behind. And I write this blog, to be a little more vulnerable than before I wrote it. It terrifies me, but I’m doing it and thus giving fear less footing than an hour ago, when I started. Fear might still be there, but it’s not in control. It’s just a bug in the corner, and eventually, by the grace of God, it shrivels up and dies.”

Kevan’s book “We Carry Kevan” is available for pre-order until April 23rd. Please support a fellow author and pre-order his book, I know you will be encouraged by it.

To check out more about Kevan you can go to: www.wecarrykevan.com